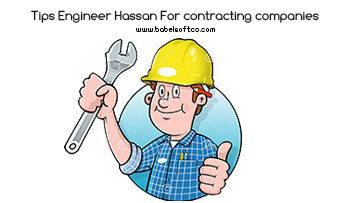 Listen to the video and know our goal

In Engineer Hassan's company,it was the policy of exchange policy on projects through the staff custody, it was noted that  the custodian was taking custody of projects other than the projects allocated to him and the disbursement of advances to employees and payments to suppliers and contractors, knowing that he is charged with disbursement on specific projects

Version 2017 of Babel program  allows you to set a credit limit for employee custody, the system doesn't allow any user to spend any amounts to the custodian beyond the credit limit

See are the employees custody causing you trouble

Eng/ Hassan; Because of poor planning and he is implementing the project of establishing a school and at the last stage of delivery, he installed the doors and windows Alometal surprised that the alometal factory will finish the order after          6 months because the procurement department has a work late and a solution from the two countries either pay a delay or pay the cost of an increase of the factory against time pressure and in all cases lost money

Babel's 2017 release allows you to link procurement management with project management, contract preparation with suppliers and penalty clauses for delivery on time

Engineer Hassan approved a supply order for a supplier to supply cement to the project and the supplier supplied the required quantity but returned before the scheduled date of use. The result was that the cement was exposed to moisture and the amount of 10 tons and the area of the store is small on the quantity was distributed to more than one place inside the site. All say it destiney

Babel's 2017 releaseallows you to issue orders according to a project schedule with the delivery date, quantity and delivery location

Engineer Hassan due to lack of linkage between procurement management and project management; The site engineer repeated an order to buy 8 tons of iron twice inadvertently and the storekeeper disbursed the order quantity was $ 51,70

Engineer Hassan was in one of the tenders project for the establishment of a school and had a similar project implemented by the company of 3 years asked the financial department to analyze the expenses and quantities of materials that went on the project and could not get information because the accounts are running manual and Excel and the accountant who was holding the job in this period left Labor, and could not enter the tender because of the lack of information in a timely manner

The version 2017 release  provides analytical reports for any project, decentralized work with an employee and archiving documents

Engineer Hassan was the owner of bank facilities to cover the  guarantee letters from the National Bank, and was issued a tender and when the final letter of guarantee was provided the limits of funding for the bank does not allow forced to cover the guarantee by 100%, otherwise the cost of commissions and bank expenses and was in 3 projects were delivered final The letters of guarantee were not released

Engineer Hassan reviewed the ministry in the extracts raised and was surprised that extracts 4 and 6, which have been lifted from two years and was the only parts of them. The complete extracts were obtained. Imagine if the amount was collected on time would save the company sum of money

Engineer Hassan contracted with a subcontractor to work on several projects at different prices from one project to another. When preparing the executed abstracts for the contractor, the accountant priced the contract for the same contractor. The price difference between the two contracts was a large sum,

Engineer Hassan has always had a lot of problems with the employees at the company. He had employees of different nationalities. He has a clear system for following up the annual leaves of workers, stays and work permits. One day, 5 workers were surprised to find their work and the same delay. Air tickets are reserved and alternative is not provided in addition to non-provision of labor entitlements

Engineer Hassan had a working labor in the production system and the labor office was not recognized except for a salary and a work contract and he had a group of paints consisting of 3 industrial and 5 workers. The end of each month was measured by the work and paid to the supervisor and the supervisor distributed the amount between the workers and the distribution was according to the personal mood of the supervisor and the workers Complained at the Labor Office, knowing that their production status was better than the salary

Version 2017 of Babel   added a specialized system for maintenance and operation of the management of contracts of installation, measurements and maintenance and periodic visits and emergency

Eng/Hassan decided to work in the field of real estate investment and equipped a professional marketing team in addition to advertising campaigns. The team appeared to market residential and land units and the target customers exceeded 40 thousand customers were contacted with them and at the end of the first year found that the sales percentage does not exceed one quarter of the target size. The cost of staff salaries, communications and campaigns was enormous

100 questions to choose the best program

How to deal with an angry customer